Really good running technique is a complex business and requires the balanced co-ordination of many features. Top runners pay as much attention to developing strength in the core of the body (abdominals, lower back, gluteals, etc) as they do to ensuring correct head and shoulder alignment and arm balance. But the most fundamental of the body's movements in running concerns the feet. While this may be an obvious statement, most photos of runners feature their upper bodies - and grimacing faces. Important features such as footstrike, range of leg movement and overall posture are difficult to identify.

Rich Clarkson spent several years of his life as a photographer following the training and racing of a young Jim Ryun (pictured below), who became the first high school student to run under 4 minutes for the mile and then broke the world record for that distance on 17 July, 1966. Time and again, Clarkson's photos of 40 years ago reveal the secret of fast but relaxed running technique: landing on the front of the foot (not the heel), keeping the body upright (not bent forward), and driving up and down with the arms (not side to side). And all accomplished in the simplest and lightest of shoe designs, rather than today's large, cushioned shoes. 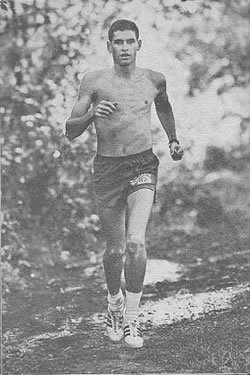 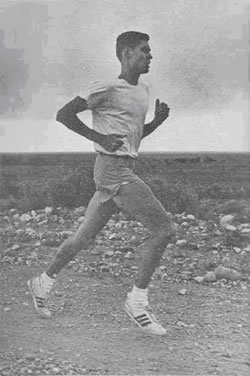 These photos were scanned from The Jim Ryun Story by Cordner Nelson - we can't find anyone to ask permission to use them so, hopefully, nobody will mind too much... You can find the whole book online at the Track and Field News website.

Modern shoes don't force runners to land on the heels, but with the heel slightly (and in some cases considerably) thicker than the forefoot area they certainly encourage it, particularly among slower runners. Landing on the heels isn't simply a question of asking the rocket science of today's shoe to absorb three to six times the body's weight - realistically, they can't. Landing on the heels requires the foot to remain in contact with the ground far longer. Apart from slowing the runner down, this form of footstrike makes little use of the important shock-absorbing arch muscles in the foot and in very many cases leads to problems of over-pronation. In the early years of a runner's life over-pronation is "corrected" (as the shoe giants would have it) by expensive stability shoes. In later years your podiatrist will be charging even more for custom orthotics.

Gordon Pirie, a world class runner in the 1950's, wrote about these features instinctively in his book Running Fast and Injury-Free. In more recent years Romanov's 'POSE' method has given a more scientific explanation for the same features, showing what the precise biomechanical benefits are and getting a group of trained runners to run on a treadmill and measuring how hard their feet hit the ground compared with 'normal' runners of a similar standard. Romanov's approach includes a progressive set of drills intended not just to teach the method but to help the runner achieve the soles of the feet the awareness needed to implement it properly.

Australian podiatrist and consultant to a shoe company Simon Bartold reckons sports shoes may do more harm than good. Anything, he reckons, placed between the foot and the surface it is hitting interferes with normal proprioreceptive feedback, the conversation going from the foot to the brain. "So you completely alter the way in which you run, the efficiency and the function with which you run. The research now is looking at enhancing the foot rather than trying to control it or contain it."

This is not new research. The information that harder midsoles attenuate shock better than soft soles has been public since 1987. "We've known about it for a long, long time," said Mr Bartold. The problem, he says, is that many sports shoe manufacturers have spent considerable amounts of money marketing certain products and are unwilling to change their marketing focus. "What you are dealing with is a very unusual crossover between hard-core science and a commercial product, and it's an unholy marriage."

Even with the best posture, running with a heel strike puts a greater loading on the quads and the iliotibial band, whereas forefoot running spreads the loading more evenly, encouraging muscle elasticity in the hamstrings, calves and foot flexors in absorbing shock and generating elastic rebound: calf and thigh muscles work together to absorb the body's weight. This relieves the knees, iliotibial band, hips and lower back and results in a far lower incidence of training injuries.

Runners looking to adopt this running technique need to make changes gradually and carefully. Some runners may even need a complete reconstruction of their running style, something best started at a time of year when training workloads are low and during a recovery/transition phase of a traditional periodised programme. That way, the runner has the time and inclination to learn and focus on something new before building up workload incorporating the new technique. It would be folly to introduce it during the racing season.

In making the change, runners who currently land on their heels will find themselves using their achilles tendons, calf muscles and those in the arch of their foot much more than before, and there will be some initial soreness, the cure for which is to rest before doing more. Anyone completely new to this technique should begin with simple drills and non-running exercises, such as running on the spot, running backwards, or skipping with a rope. Over time, runners should consider adding a short amount of barefoot running to their weekly routine in order to work the full range of the calf and achilles muscles - but again, this should be done gradually.

As runners let their feet learn to feel the ground and land properly, modern cushioned shoes will quickly begin to feel more like boots, and runners will feel more comfortable in racing flats. Changing shoe type is again something to be done gradually and initially for only shorter training runs because racing flats offer less support and the runner's arch muscles take time to develop.

But back to Jim Ryun. Many of us marvel at most top runners, especially the Kenyans, when watching their running gait and one thing that really makes an impression is the way their feet come up so high after leaving the ground, almost touching their backsides. This is more evident in the shorter events, but even some of the 10km runners show this. What's at work here is the simple principle of leverage. It's easier to move a shorter lever than a longer one, and the leg is easier to bring through if you shorten it by lifting the foot as close to the backside as possible. It can also be brought through quicker and so increases stride rate, in turn making it easier to increase stride length. It takes a lot of strength in the hamstrings to get this kind of lift, but the starting point is to land on the front of the foot and not on the heel.